I’ve posted here before about my usual lunch partner, Morris and how whenever we play he wins.  And how it’s been a goal of mine to win a day’s overall score on a day when he’s shooting well.  As it happens, today was that day!

The last two days I’ve gone at lunch, I’ve done drills 90% of the time.  Specifically these:


Now, I’ve never successfully completely any of those in the manner in which they are supposed to be done (ie: without missing or fouling) – but each week I try them, I get a little closer.  In addition to this, I’ve been reading that book Zen Pool mentioned the other week.  This week, I have found my pocketing skills have increased by a big margin from such a simple tip from that book: Focus on the exact spot on the object ball you want the cueball to contact.  This seems almost automatic, but for some reason, I wasn’t focusing on a spot, rather an area.  After employing this spot-based aiming system, I’m pocking most of my shots dead center pocket.

So, back today.  I had planning on running through another drill I haven’t yet tried, but shortly after I got there, Morris showed up.  So we started playing.  He gave me first break and as luck would have it – I sank the 9 on the snap. Heh.  Next rack, I broke dry, and he combo’d the 9 off the 1.  It looked like it was going to be an exciting day, and it was.  After about 6 racks, he said “Lets race to 5, put some pressure on ya.”  So we cleared the wire and away we went. 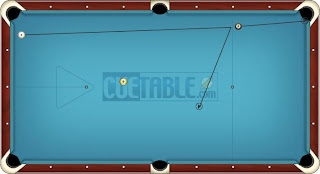 I have to say, the shot of whole day was this one.  The cue ball was about an inch and half off the rail and in dead straight line with the 8 into the corner pocket.  I thought about using force-follow to hopefully bounce offline and come back up off the short rail, but the chance that I would follow the 8 into the pocket prevented me.  So, I lined up the shot straight on, jacked up the back of the cue and added just a hair of right and power-stroked it.  I kept my head down to ensure good follow-through (as best as is available in that position).  I heard the 8B drop and then looked up, to my surprise I saw the cue ball slowly creeping across the table towards the center – giving a fairly easy shot on the 9.

Overall, I shot today the way I know I can shoot – and I’m very happy with myself.  Previously I would get little glimpses of this, for 2 or 3 balls then that’s it.  Today I would consistently run 5 or 6 balls with a decent spread.  Now, if only I can keep this level of focus and stroke – I’m looking for the next improvement already!