I posted the other day about entering a tournament over the holiday break. I also said I’d post my rant about bar tables… well, here it is.

Now, as a precursor, it’s entirely possible that my experiences are not the normal experiences. I realize that there are levels of quality in all things and I recognize that my particular location isn’t exactly high-up on the scale.  However, some things are unforgettable/unforgivable.

I have never seen balls as nicked up, filthy, dented as the balls that were on these tables.  The tables were the standard 7ft coin-operated tables; but they clearly were assembled as quickly as possible as there is no way they were tested for accuracy or balance.  The foot rail make a clink/thud sound when you tried to bank off it; something both my opponent and myself commented on.  The rail was dead.  It wasn’t the only one, but it was the worst.

A little background – I play on 9fts with relatively fast cloth on a regular basis, so making the switch to these 7 foot tables gave me a number of problems – but couple that with what I discovered about this particular table and it cost me at least one game. 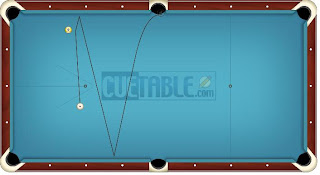 Like I said, I had been having speed control issues and this was no exception.  I’m not very confident with this shot, so I hit it perhaps a bit too hard, but I also know that I don’t scratch, even hitting the 3rd rail, it’s close, but it’s not a scratch.  The line I drew here is close, but not 100% accurate, it started curving just beyond the 1st diamond heading towards the long rail and it just barely toppled into the pocket.  The insult to injury of this shot was that I had just completed my longest run out of the day; and needed that rack to get back into the match.  So, instead of being down 4-3, this scratch put me at 5-2.

I played on a number of a tables that day and all of them were similar in levels of filth and damage. Maybe it’s just how bar tables are – especially considering they’re coin operated and that location is notorious of loads of teenagers.  But, when the 9ft tables are kept clean, well clothed and the balls are kept behind the counter and in good condition, it’s that much harder to accept such poor conditions.  I mean, I couldn’t get a tight rack to save my life, no amount of ball spinning or tapping was holding these things in place; which is why I suppose so many people smash the rack like the Hulk – which damages the balls – downward spiral much?

It’s precisely things like this which keep me from entering a league – I refuse to play on such low quality equipment.  This is a hobby and I won’t force myself to play on anything I don’t want to play on. And no. I don’t think I’m being unreasonable.