So, last Friday night I went back to The Break and met up with Gene for some good practicing.  It wasn’t an outstanding night by any means, but late in the morning he noticed some things I was doing wrong with my stroke.  So, after a lot of explaining and re-explaining and demonstrations, I think I finally got it. 🙂

I found the basics of a proper stroke a while ago and describe it in this post (towards the bottom) but was never able to really put any power into it.  It was almost always a finesse type of stroke.  I did see my accuracy improve greatly though and have been trying to work on making every shot this way, but I still had some issues maintaining it.  Well again thanks to Gene, I was able to work out some timing kinks in my stroke and can now put some real power into it.

After we worked out the issues, we just shot a variety of power stroke shots, including these: 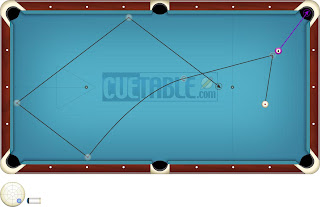 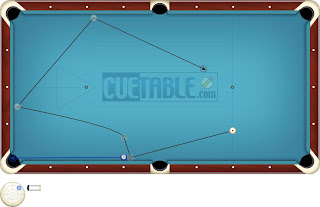 It was really amazing to see that cue ball dance around the table, knowing that it was *ME* that was doing it. I was almost giddy shooting these things.
I gotta say, I absolutely LOVED the amazing difference in the sound of my cue – it has such a distinct *PING* to it when it’s stroked.
I really can’t wait to get back on a table and continue shooting these shots – along with the others from the last time we had a learning session.
I feel like the roadblock I mentioned in this post has finally been overcome.  I had a strong feeling I was on the verge of a new breakthrough, and I think this could be it.
Now, only the last of my very serious areas of concern remain: speed control.  Just lagging up and down a table is fine, but I have to be able to quickly and knowledgeably adjust speed based on my perceptions of the table-speed, the cut angle and the english I’m  using.  I think now with my new skills and the existing drills I have, I can seriously work on this last, largely misunderstood, area.
I think I’m in prime shape to prepare myself for the tournaments coming up later this year. 🙂
Now I can finally get this shirt: