As I mentioned in my last entry, Saturday night I learned 2 different 3-rail kicking systems.  The first one, which I’ll refer to as the “Short-Rail-System” (SRS), is depicted below.

The system is based on 3 simple paths: Along the target short rail: near diamond, middle diamond, far diamond.  To get to these three points, you aim for a relative set of three points along the starting short rail.  As the cue ball moves up and down the long rail, you adjust the contact point of the starting short rail accordingly.  It’s much like a slide-rule actually.  I’m leaving out the specific details because it’s not my system to teach; although I’m sure it exists by other various names, the person who taught it to me claims it’s his in design, so I won’t spoil the info if he wishes to publish it.

I will say that when hit properly and with a bit of table luck, it’s 98% accurate, and as such while I was learning this system, I was given this challenge.  Hit the 5 going 3-rails.  I recognized that this was a 2-way shot: Aim to hit it thin, chance to make it – if not, the CB will probably go elsewhere.  I took my time, lined up, made the distance adjustments and hit the shot.  I made the 5 on my first attempt. 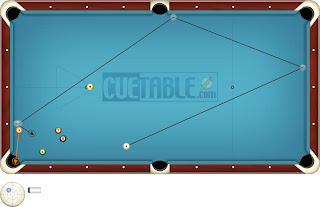 I also learned the basics of the diamond system and the clock system.  The clock system is something I’m really excited about – specific to my game by way of safety-plays. 🙂  Now, when I play the safety dance game I’ll have 2 systems to exercise, not just educated guesses. 🙂

I have to admit though, with my mathematical enthusiasm, I’m a little disappointed in myself for not devising on my own some of these patterns.  I knew that existed, I could see them – but I never took the time to study them to put them in order.  I will rectify this when I notice the next thing.