This weekend was pretty low-key.  I was supposed to have a friendly match with my brother in law, but he had his wisdom teeth removed earlier in the week and wasn’t feeling up to playing; which I completely understand.  So, I went to the hall anyway and decided to do some work.

I warmed up with my new “usual” warmup exercise (see the Warm Up Drill video in a previous post), a few times around the table.  Then AJ asked if I cared to shoot a few games – sure.  So we played a while, then it got busy and he went to help at the counter.  Amongst all of the games, somewhere I found myself out of line and was jawing every other ball.  So, during this break, I did a stop-shot drill at varying distances along the long rail.  After that, I tried the “L” drill for the first time: 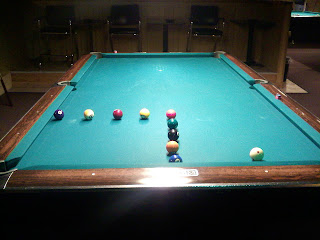 I did the drill on each corner.  Well, lets just say I worked through each ball in the drill on each corner.  I was unable to successfully run the balls in order without missing, all 9 in a row – but I never expected me to do that anyway.  My position play is decent – meaning I know where I want the CB to go, and generally how to get it there – but my speed control is lacking and I tend to overrun position.  When I try to combat that, I underrun by a significant amount.  Of course, the 2nd time I shoot the shot, I’m usually able to get it just about right.  Having the first shot as a guide is great – and I do learn from it – but it’s very frustrating to so consistently come up short or long on a shot – and so rarely exactly on the spot.

I think I found this drill to be easier than the 9 balls down the center of the table drill.  Maybe because I was only working with one pocket? Or Maybe because getting position up the center line is easier for shorter distances?  I do know this … by the time I was rounding the corner of the “L” my position was around the 1st diamond past the side-pocket (too far away).  This happened nearly every time I tried this drill.  Which inevitably led me, in an attempt to correct this, to come short on the last 2 balls.   It’s strange, even the 4th time through the drill, I still managed to make the same mistakes – even while thinking that I can correct them.  *shrug*

My “shot of the night” was actually 2 shots back to back.  The situation: 9-ball game, opponent has left me half-hooked for the 5 ball.  I know I can hit this ball with a slight masse around the blocker – I think maybe if I’m lucky I’ll make it, but I’ll definitely hit it.  Well… I made it!  But, then the ball creeps on over to hide behind the 9 ball – hooking me for the 6.  It’s essentially the same shot, so I line up, jack up, and pull the trigger … and to my amazement, and those watching, I make that one as well!!  Here’s the layout: 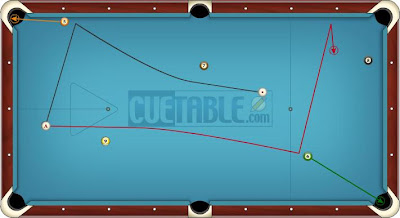 I quickly threw this layout together, and the 9 might not be in the exact spot.  It was only a half-ball (at most) blocker.

I spent the rest of the night playing one of the employees, making some good shots – working on safety plays rather than attacking all the time.  It was a good time.