Today at the pool hall, there was no one there.  I watched some guys play 3-cushion (English Billiards) for a while, and then realized they had left the balls on the other 3C table.  So… I took it upon myself to give this game a try.  I’ve always enjoyed watching people play and it’s such a “puzzle-solving” type of game. I really like it – in theory.

I shot around on the table for about an hour – but was able to make about 10 points.  That’s not good, in case you were wondering because I probably shot close to 50 shots.  So, 20% completion is not good.  However, allow me to toot my own horn, I’m quite happy with it considering I’ve never so much as hit a ball on a 3C table before. 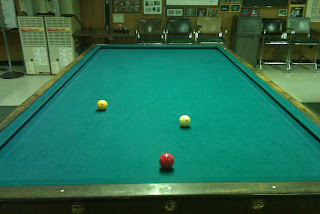 For those of you that don’t know what 3-Cushion is, it’s simple:  Using either the white or yellow ball as your “cue ball”, you must make the cue ball hit at least 3 rails (cushions) before contacting both balls.  Traditionally, the shot is played by hitting one of the balls, traveling 3 (or more) rails then contacting the 3rd ball.  The table is 10 by 5 feet in size so some of the usual angles I’d be used to are different.  Also, the balls are about 15-20% bigger than a standard pool balls; which means they are heavier.  However, getting a ball to travel 5 rails after contact is a little easier.  This particular table is not heated, there is a heated 3C table which makes the balls travel quite a bit faster, so getting 6+ rails is entirely possible, although rarely necessary.

I am seriously considering taking a few lessons from the local instructor on 3-Cushion.  I can sit there and hit balls all day and try and learn some of the patterns on my own; which I do really enjoy doing – but I think it would be of great help to have someone to guide my learning.  It’s very affordable too, so this is much more likely to happen than taking him up on the 9-ball tutoring he initially offered.