Monday night XY and I hit up the pool hall, this time with my old video camera in tow.  We’ve been talking about videoing ourselves for a while to see what our strokes actually look like from a distance and whatnot.  I set it up in a corner and just left it there.  We played for about 2.5 hours with it running.  Although neither of us really played well, it was still informative to go back and watch it.

Upon first viewing and after getting past the horror that is watching yourself, it became pretty informative.  It turns out, that despite my sincerest efforts my elbow is not perpendicular to the cue, it’s about 5-10 degrees further away from my body then the butt-end of the cue is.  Although my stroke is pretty dang straight, I do want to fix this.  I wonder if this is the cause for those slight errors I continually make, when everything else looks and feels right.

I was nice to get a couple really nice shots on tape though.  This one which I have never tried before.  I didn’t feel confident going the other ways to get on the 9 and this idea just came to me when I was looking at it.  I’m actually quite surprised I got it all the way around, but was very happy to watch my plan unfold. I’m not 100% on the exact positions shown here, but this is the general idea.  My draw stroke is pretty strong and because the balls were so close I didn’t have to worry too much about deflections on the cue causing a problem. 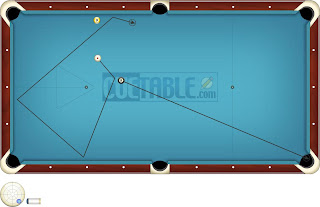 A few racks later, after a long safety battle and a few missed attempts, I found myself at the table with this layout.  Again, relying on my strong draw skills, I got down, lined up and fired.  The cue ball took a hard right-turn and went right into the 9.  The right-english helped throw the 9 into the pocket and I was very happy. 🙂 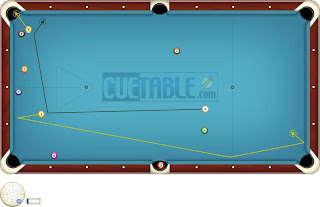 At some point, I will video myself doing some drills and whatnot just for archival/reference sake – and at some further point in the future, I’ll get one of those “Dazzle” things that will let me transfer the vids to the computer so I can upload them.
The first rack of the night was the most entertaining.  My first “Golden Break” in over 3 weeks, and it’s on video. lol
I tried to study my break form as well, I’m getting good action on the balls and when I hit it properly the cueball is generally in the center-ish part of the table.  Too often though, I hit it with bottom and it comes flying back towards the corner pocket.  Doesn’t scratch, but doesn’t leave much of a shot either.  I’ll continue to watch the tape and look for more little details to either fix or continue to work on.
I will absolutely continue to video myself – and I think I will ask XY to hold the camera and move around the table to show all the angles of my stance and stroke to see everything that’s going on.

For anyone that’s reading this – do you do this and what has been your experience with it? Find it helpful? Harmful? Embarrassing?