Let me just start off by saying I WON THIS TOURNAMENT!!!

Okay, now that that’s out of the way I can talk a little more objectively about the event. 😉  This tournament was a Jack’n’Jill Scotch Doubles 8-ball event, with team limit skill level of 10.  My rating at the host location is just a 5, and my partner’s was a 3.  So, we played as an 8 combined, which meant we only had to get 3 wins per match. Most of the teams were a 9 and couple were a 10; though 9’s and 10’s both went to 4.

Although I don’t remember feeling particularly amped up that day, and quite honestly, I expected to be out of the event by 5pm (and was planning on attending another tournament that evening).  But, the pool gods had other plans for me/us.  We started off winning our first match 3-2 pretty easily.  We had good layouts and just played smart; even though both of us were unfamiliar with the equipment as they use the lighter red circle cueball and had just put on new cloth.  This event has had a history of long delays between rounds so I was shocked when we were called to play again just about 30 minutes later.  We faced off with a team I thought had a good chance of cashing.  But, the rolls kept coming our way, and their 4 kept making mistakes.  Again, we won 3-2.

Now it was near time for lunch, but I was far too scared to eat as that has been my downfall in the past.  I stuck with a combination of water and coffee for a while and that seemed to work out well.  For our 3rd match we had to play the bar owner and his teammate.  But, same as the last match, we were able to take advantage of the rolls and their low skill player left too many opportunities for us to capitalize.  We didn’t start off well in this match, and found ourselves down 1-3; they were on the hill, we needed 2.  The balls aligned themselves just right and we were able to steal that match!  And just like that, we were in the HOTSEAT!

Another team, friends of ours, had just lost to the team we would face in the hotseat match.  They warned us their 3 was playing very well; didn’t miss a ball the whole match.  I don’t know if that affected us or not – I’d like to think it didn’t; but who really knows.  This was a tough match and it went hill-hill; but we made a couple of mistakes late in the match and they won the hotseat, sending us to the left side.  However, that means we were guaranteed 3rd, in the money for both the tournament and the calcutta.  From here all we had to do was have fun and shoot some pool as everything beyond this was a bonus. 🙂

We had a good long wait before we’d play again (about 3 hours) so I ordered a proper dinner, high in protein, low in carbs/fat; while continuing to hydrate thoroughly with water to offset the soda and coffee.  We waited and watched our friends battle through the 1-loss side until it was finally time for us to play.

Here’s where things got weird – in a cosmic sort of way.  Their high skill level started making rookie mistakes – like scratching in the side off a ball near the foot rail.  It’s as if the pool gods again reached down and gave us the golden favor of the rolls.  We fought hard and had to make some tough shots, but we came with it when we could and we progressed to the finals!

Before the match began I offered the waiting team a chance to hit a rack since I know they’ve been sitting for longer than we sat.  They were very appreciative and I wanted to make sure if we won, it wasn’t because we were warmed up and they weren’t.

We would have to beat them twice to take the title and we fought for it.  We fought hard and they tried every bit as hard; perhaps too hard.  We made it to hill-hill in the first set and played a long-table ball blocker safety.  Their high skill level pulled out his jump cue, jumped the blocker, cut the 8 in the corner… followed by the cueball in the other corner.  We won the first set!

The 2nd set we quickly got up 2-1 on them and held them down with smart play until our knight in shining armor appeared.  On a wild shot, the 8 ball flew around the table and sat right in front of a corner pocket – just behind one of their balls.  Their ball was so close that nearly any touch of their ball would sink the 8.  We quit making balls and just placed the cueball in areas of the table where they couldn’t use another ball to slide in off the rail and off the 8, solving that problem.  We continued this pattern until they tried a couple of desperation shots; which did not work out for them.  Soon, they found themselves stuck behind a blocker and forced to kick at their last ball, which was nearly frozen to the 8, hanging in the pocket.  They used their coach earlier and it was their low skill level’s shot.  After a lot of consideration and measuring and calling a ref to watch the hit, we observed as she swung the cueball off the rail trying to barely miss the 8, which she did not, and it bounced off their ball, into the pocket and dropped.  WE WIN!

I was a bit in shock – I had never won a tournament so I was kind of standing there like “it’s over, right? we won, right?”.

Afterwards, I reflected on how I played and realized that a few things were key to this win.  First and absolutely foremost, the biggest key to this success was staying positive.  Even though I missed a couple shots (and really, only a couple all day) and we lost some racks because of it – I never got angry.  I didn’t get upset and I wasn’t defeated or deflated when we did lose.  Secondly, I’m attributing my focus on the table.  I stuck with my pre-shot routine and I didn’t pull the trigger until I was confident in the shot.  This forced me to play a little slower than usual, but in most cases, it ensured a good shot with good position for my partner.  Thirdly, hydration. I probably drank 100oz of water throughout the day and only about 16oz of soda and coffee (each).  I didn’t eat a lot at any one time.  I snacked mostly; just enough to keep my energy up without being full.  I also went outside to enjoy the beautiful day after every match.  I walked around the parking lot and soaked in the sun.  Lastly, I accepted what the table gave me.  If was left with a tough bank, I didn’t get annoyed that I had to shoot it; I made up my mind to shoot it and it went.  I had to shoot 4 tough 8-ball banks throughout the day and I made every single one of them.  Banks that I never make were going in clean.

Everyone has heard that phrase “When it’s your time to win…” and I had never put any stock in that phrase.  I thought it was one of those things you tell people who can’t win to make them feel like their time is coming.  Well, perhaps that’s true – but that night – I lived it. It was our time to win.  The gods blessed us with more rolls than anyone else in the tournament and we stayed strong and finished what we were allowed to finish.  Did we get lucky? Absolutely.  Did we play well all day? Absolutely.  Who’s say what the difference was – I don’t think it was anything tangible.

And for now, I will just bask in the high of winning a tournament. Leaving a tournament with more cash in my pocket than I entered with. Gaining the respect of my peers and opponents. Hearing the applause for a long day’s work.

It very well might have lit a new fire in me.  I’ll talk about that in another post later.

Here are some pictures from the event. 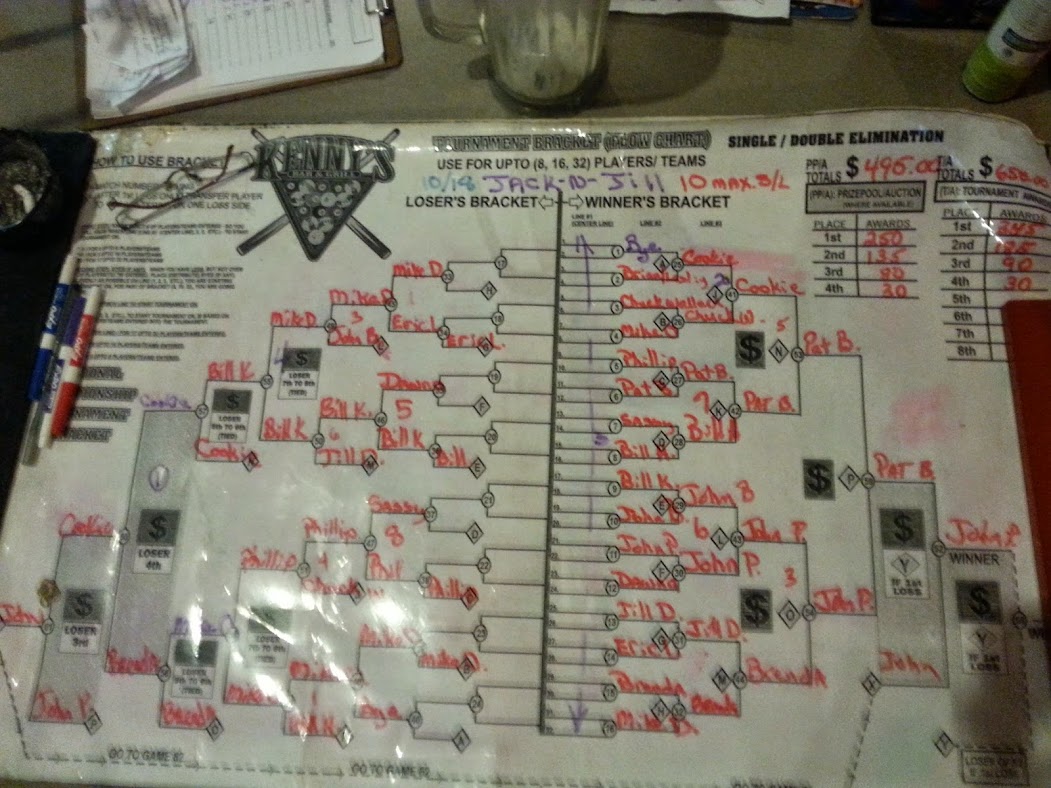