So, as I’ve mentioned in earlier posts that I often run a number of drills during my practice time.  Several of them are 9-ball layouts, and some of those are part of the IPAT (International Playing Ability Test).  Typically when I run those drills I don’t hold myself to a particularly high standard – meaning that if I miss a ball, I keep shooting just to see if I can get back in line.  But I had never successfully ran the entire table without fouling or missing before.  Yesterday, I was determined to do it.

I started shooting/warming up with 10-balls tossed out, I did that for a while until I felt decently in focus.  Then I started with this layout: 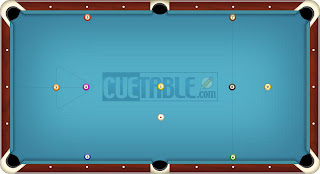 As far as layouts go, this is what most would consider “fairly easy” – but given the trouble it’s caused me over the last few months, I wouldn’t call it that.  Yesterday, however, I really felt confident that I can and would run this table successfully.  I almost always made it to the 6 before really getting out of line and having to start over for one reason or another, and it was frustrating to be sure, but I kept at it. Took several deep breaths before each re-rack and started again, keeping in mind the mistakes from the last run.  Not letting them scare me, but using them to let me know what I did wrong and how I fix it this time.

It took me 9 failed attempts, but on the 10th, I did it.  I ran it. I can’t say perfectly because I got a little thin on the 9 ball, but I made the shot. I made all 9 shots, sequentially and with relatively decent position!  I finished it and wanted to let out of a giant YEAH!!!  but no one would’ve understood, so I gave myself a small fist-pump and went to write down my stats.

You can see a video of how this layout is ran here, courtesy of ForceFollow

After I gathered myself from my happy place, I decided to move on to the next drill instead of ruining this one by trying it again.  I picked up this layout from my binder and arranged it on the table: 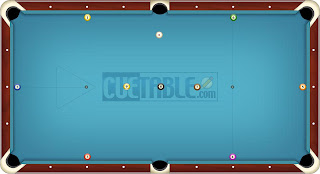 Now this one is a bit tougher in my opinion – although on my 3rd attempt I ran to the nine and got a little cocky with it and super-stroked it, which much to my extreme dismay, left the 9 jarred in the pocket.  That only game me more drive to finish it because I came so close that time.  Unfortunately, it took me 15 attempts, but I successfully completed that one too!!  And again, I wanted to give a big HELL YEAH, but again opted for the quiet celebration.

I went on to the next layout: 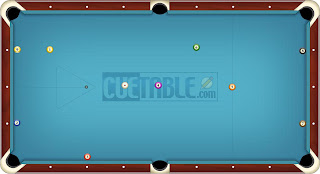 But this one eluded me.  You’d think getting from the 3 to the 4 would be simple, and it should be, but since I always got too long on the 3, I ended up with bad position on the 4 to make an easy transition to the 5.  I once made it to the 7, but played it too cautiously and jawed the ball.  I went on from there as if I had made it and ran the last two easily enough – but this will be the next drill on my plate for sure.