I just dropped off my shaft to get a new tip.  I’m trying a Talisman tip, suggested by a discussion on tips with a pretty knowledgeable guy at C&C.  If I don’t like it, I can always switch it out. I mean, it’s $20, not free, but still, it’s not like changing shafts. Should be ready by Wednesday, but I’m not sure I’ll get back there until Friday.  I really can’t wait to try it though.

In other news, I did the break, take BIH, and see if I can run out for practice today.  I never did all 9 in a row, but generally I only missed once, or hooked myself after making the shot so I shot it again.  The layout is below: 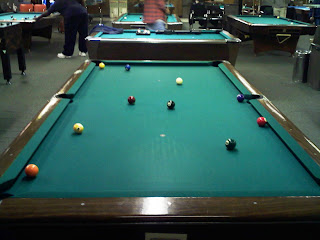 And the CT layout: 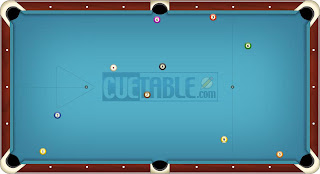 Strangely enough, the 2 balls that gave me the most trouble was the 1B, getting behind the 2 back to where the CB was originally.   The other was the 3B, either I’d make it and get behind the 8, or I’d miss.  It was pretty frustrating actually.  But, I played through this rack about 12 times and I like this layout because it has some difficult position shots, some using top, others draw and some with a bit of english.  I will remember this layout in the future.