As I mentioned in in this post, I saw that my elbow wasn’t in line with my wrist/cue by videotaping myself playing.  Last weekend, I talked with another player about stroke and what some of my problems were.  He made a few suggestions and I finally got a chance to really give them a try yesterday.

I don’t have any video, unfortunately, but I think this will work – but I’m also open to further advice from people.  I’ll try to get some still-shots this weekend though.

Overall, it was a frustrating day because I did miss a lot of balls – but I think it was an excellent day just as well because I really got a chance to work out some serious kinks in my technique.

Here’s an example of what used to happen when I tried to shoot this: 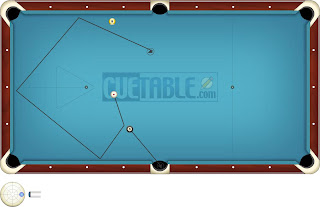 Now here’s what happens with my new stroke: 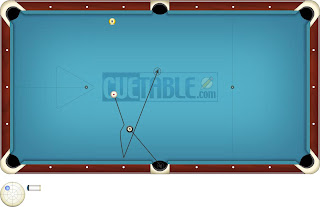 As you can see – it’s a lot simpler, and more reliable.  Not to mention if I have to deal with traffic, there’s much less to contend with.  I am a happy, happy pool shooter.  Well, I will be if I can get my accuracy back with all of these changes employed.